This time it’s Jane’s turn to pick the theme for the CD Sunday Challenge – she’s picked Things To Eat. I decided not to make a greeting card but instead have made single page cards (like playing cards). 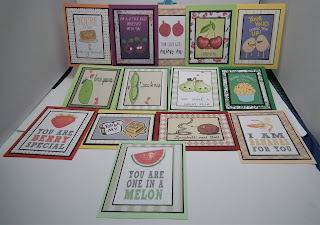 I searched the internet for images of food with funny sayings.
They say things like: ‘You’re my butter half’, ‘We make a great pear’, ‘Muffin compares to you’ and ‘I cherry–ish you’.
I copied these into Serif Craft Artist and resized them. I then added a black frame around them to look like they’re matted onto black card. These were then printed off and cut out.


I then rummaged through my box of papers and used up ones I’d printed off and not used I have a habit of printing off several papers at a time when I’m making cards but then only use one of them! The papers where then matted onto black card and the image added on top.


The CDs the papers were from are Perfect Essential Companions and Perfect Forever Companions by Creative Crafting World. And several Craft Artist kits – Born To Shop, Festive Fayre, A Merry Little Christmas and Birthday.


I then did a bit more stash busting by cutting up A6 card blanks and adding them to what I’d already done. The A6 cards I’ve had a very long time – they were free with a magazine I used to subscribe to and every month you had 6 card blanks and embellishments.


I’ve made these cards to give to my husband to try and lift his spirits when the time comes. Sadly the bowel cancer has returned and also spread to other areas (his lungs and peritoneum). It can’t be operated on or cured. He’s just had his first session of chemotherapy but it may only delay the spread of the cancer and will not cure it. We’ve been told the chemo may add a further 3 – 6 months to his life, without chemo they’ve told us he may have 18 months. We’re both trying to deal with the news which has turned our world upside down.


I’m going to try and continue being on the CD Sunday Design Team although there may be times when I’m unable to make something for a challenge. I’m very grateful for the support and understanding from my fellow team mates – you’re all amazing people! Thank you.
Posted by Pamela at 08:00 8 comments:

I hope you all enjoyed the Beautiful Blooms theme at CDSunday – it was lovely to see so many entries for Jocelyn’s theme.
This fortnight it’s Carol’s turn to pick the theme and she’s chosen ‘Second time around/recycle’. This is a favourite theme of Carol’s and mine. I once made 10 ATCs for a recycle theme – we were only supposed to make 2 LOL!
I made my card sometime ago and at the time I was seeing a lot of 'bow' cards that were embellished with lots of lace, pearls and flourishes so decided to have a go at making one. I used a template to make the pieces for the card which I bought from someone on the internet. You’re emailed files for the individual pieces to be printed onto card and hand cut out. You also get files you can use in various electronic cutting machines which I guess makes it a lot easier, and faster, to cut them out. At this point you’re probably expecting me to say where I bought the template from………………. but I’m not going to give the link. I’ve heard, around various internet sites, that there’s a dispute over the ownership of this template. I’ve spent a lot of time looking but can’t find anyone else selling the template other than the person I bought it from. I’m sure they’re the legitimate owner/designer because the templates all come with a copyright printed on them. So if you want to make a bow card you’ll need to search the internet and decide for yourself if you’re buying from a legitimate source. 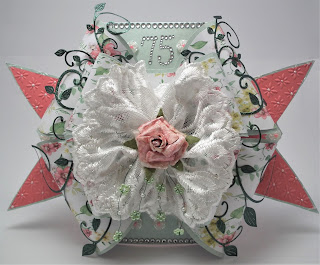 The base card is hexagonal shaped and cut from pale green pearlised card. You get a template for this but I used a Tonic die from the Secret Spring Hexagon Kaleidoscope Box Lid and Base Set. Both layers of the bow are cut from card that was printed with designs from Craft Artist kits. The pale green striped paper is from a kit called Posy Party and the floral paper is from a kit called Occasions. They’re both designed by Victoria Nelson. The ‘tails’ of the bow are made from a base layer of pale green pearlised card and then a layer of Tonic’s Craft Perfect card in Coral Pink. I wasn’t happy with this colour, I think it swamps the rest of the colours and I should have changed it. I ran the coral pink card through a flower embossing folder and dotted the centre of each flower with Ivory Seashell Nuvo Crystal Drops by Tonic. 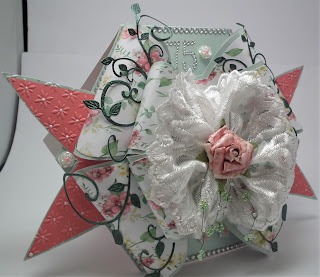 Once the basic bow card is made you can move onto the fun bit – adding all the embellishments and frills! The 'lace'  in the middle of the bow is a panel cut from a camisole. It was far too pretty to throw out, so I’ve had it in my stash for quite a while. I stitched the sides together and fussed with it until I was happy with the way it sat on the front of the bow. I then topped it with a paper rose and added some pearls threaded onto wire. Then I cut flourishes out of dark green card (Emerald Hessian by Tonic), chopped them into smaller pieces and arranged them around the bow. 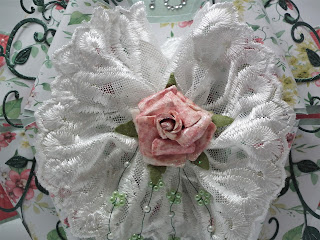 The card was made for a very dear friend who I’ve known for several years (possibly since 2006?) and who was due to have a milestone birthday – hence the number gems at the top of the card! 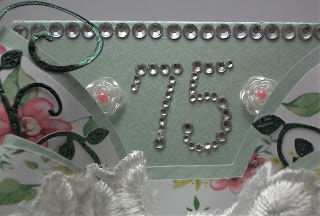 I dotted some resin flowers around the edges of the card and placed pink pearls in the centre of them. I also added strings of clear gems around the straight edges. 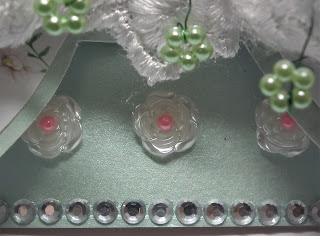 The inside of the card was decorated with the same papers/card that was used on the front. The sentiment is a die from Creative Crafting World’s Paper Boutique range of cutting dies – collection number 3. 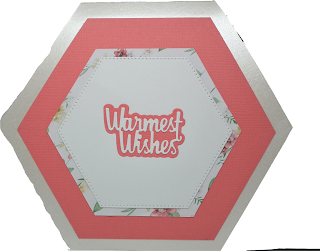 I now had the problem of getting it to my friend, still in one piece, through the mail system. I found a very old box in my craft room that was almost the perfect size but was very faded and battered – so I decorated that too! Another item that was used for a second time and recycled. I’m pleased to say the card arrived safely and intact. 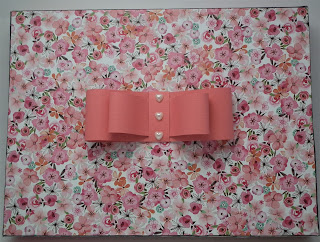 I hope you have fun with this theme and can’t wait to see what you all reuse/recycle. Don't forget that the CD Sunday Challenge is about making items using something printed from a craft CD Rom. You can use other craft items on your card/project, such as a stamp or die, but you must include something from a craft Cd. So if you like colouring stamped images or digis you can still enter the challenge but you must include something from a Cd such as a backing paper, a sentiment or a butterfly for example. In your blog post/Facebook entry you must give the name of the Cd you've used. This is important if the items you've used can be bought as a download as well as a CD as the Design team can't tell which has been used unless you tell us. Your entry can't be considered for a prize if you haven't used a Cd or if you haven't told us the name of the CD in your post. The Design team still leave comments on your blog but there's no chance of winning if the above hasn't been followed. We now have a Facebook page if you don't have a blog - The CD SundayChallenge.