If you've read my previous post then you'll understand what the title of this post is referring to! I found a card style I liked and have made 2 cards using it - the one in my previous post and now this one. This week is the last in my month as being Guest Designer for the CD Sunday Challenge Blog. The theme this week is 'Spring has Sprung' and the day I made this card it was more like summer! I sat at the dining table with the patio doors open making quilled flowers whilst the sun shone and the temperature increased - very nice! I wanted to make a flowery card for this theme but couldn't decided on a design until I came across an article in a craft magazine with a tutorial on how to make a box card. The card in my previous post was a prototype for this one! And the view from the side to show the depth of the 'box':

I printed a backing paper, from Sharon Duncan's Embossibilities Celebrations cd, onto card so the pattern would also be on the back of the finished card. The design is called mini flowers and was just what I needed for this card. The gradient BP behind the central image is also from a cd rom but it's been in my scraps box for so long I don't know where it's from LOL! The 'branch' is actually a tree image cut out on my eCraft electric die cutter. And the flowers are, of course, quilled! I've enjoyed my time as GD for a second time. It's good to see lots of people entering the challenges recently. I've noticed a couple of people that I know from the Craft Telly forum joining in and hope that you'll continue to support the blog.
Posted by Pamela at 08:30 8 comments:

I've recently been looking through old craft magazines for some quilling designs for a card I wanted to make. I came across a tutorial for some card styles and liked the look of one they called a 'box' card. I would call it a 'box frame' card as it provides a frame for a central image. As the days are rushing by I needed to make another card for the challenge at Debbees CDs DT Delights blog before it closes on 25th March. So I decided to have a go at the box card. Deb's provides free papers to download and I used the card topper/decoupage base. I cut the frame from around the topper and used it on the border of the card. The middle of the topper was then used as a central image. I resized the topper using MCS to make a square as it was initially a rectangle. I then went to town with peel off borders and corners and pink pearls! 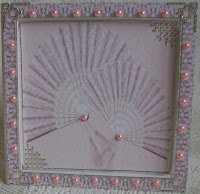 And the card from the side showing the depth of the 'box'.

I was very pleased with how the card turned out and I knew the style would suit the quilling I was thinking of doing....... but you'll have to wait until tomorrow to see that card LOL! It's my last week as a Guest Designer for the CD Sunday Challenge Blog and the card is for the new theme from Sunday.
Posted by Pamela at 17:20 4 comments:

Deb's has had a few problems with Mr Blogger this month - first he wouldn't let her post pictures and then when people downloaded the papers they were to small and pixelated if you enlarged them. Debs has now managed to twist Mr Blogger's arm and all is sorted - you can find this month's papers here. When I see fans I automatically think 'Oriental' and I've heard it said that oriental is making a big come back this year. So I've made a screen shaped card - I printed one of the papers straight onto card and used a template for the screen. I then put fan shaped peel offs onto another paper and cut them out. I've also gone around the edges of the card with some peel offs.

A very quick and simple card to make. I have an idea for another card and hopefully I'll finish it before the challenge closes on 25th March.
Posted by Pamela at 14:05 4 comments:

Spots before my eyes!

The theme for the CD Sunday challenge is Spots 'n' Dots and I knew straight away what style card I was going to make. I've made a patchwork card before (here) and it won me a prize in a forum card challenge. I spent ages going through my cds looking for 2 spotty papers that could be used together. The first card is made using the V.Funky cd from Funky Hand. I added a brad to the middle of the star and finished it off with a rub on. 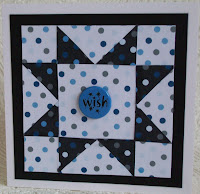 This second card is a large 8 x 8 card. The papers are from Nikky Hall's Polkadoodles cd Candy Doodles (the original cd). I coloured the middle of the star embellishment with a black promarker and added the crystal brad. 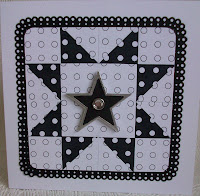 This is my third week as Guest Designer for the CD Sunday Blog - next week will be my final week and once again I've enjoyed it.
Posted by Pamela at 08:30 3 comments:

A long time in the making!

Most years there's a craft show held in Cardiff in October (Creative Stitches and Hobbycrafts). I always go and one of my sisters comes with me. The first stand we go to is Card Creations Plus as I like their CD roms and Nigel gives good show discounts. Well back in October 2009 Nigel was demoing the Musical Theatre cd and my sister pointed to the Phantom of the Opera design and told me she'd like me to make her next birthday card using that design. I think she meant her birthday in March 2010 but due to circumstances beyond my control I didn't make the card until this year! I hope she thinks it was worth the wait! 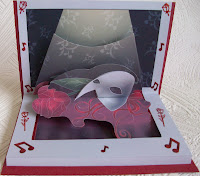 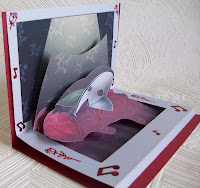 It was quite a fiddly card to make as you have to match up the design on the front while trying to stick the spacer to the top and base of the card. I finished off the frame by colouring peeloffs with a promarker. 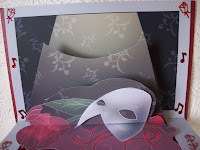 I chose roses and musical notes to tie in with the opera theme.

The theme for the CD Sunday challenge this week is 'From me to you' so I thought I'd make a card from me to my sister for my Guest Designer item. I just need Royal Fail to do it's job and get the card there in time for her birthday. Hope you have a good day sis - Happy Birthday Audrey!
Posted by Pamela at 08:30 8 comments:

After making a card a few weeks ago with paper weaving on it I've been having fun folding paper. The sponsors for this week on the CD Sunday Challenge Blog provided us with some images and backing papers. I really liked the backing papers and printed them off several times - printing the design on both sides of the paper. My favourite paper was green with a vine on it called spiral leaves. I went back to a favourite card style of mine that I haven't used for quite some time. 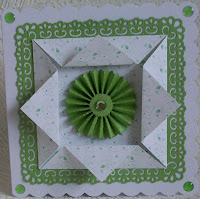 It looks more complicated than it actually is. A square of double sided paper with the corners folded into the middle and the tips then folded back on themselves. The green mat is made from Bazzill card and punched with a Martha Stewart punch around the page punch. The rosette is made with the same card using a Sizzix rosette die. I then decided to look up some new (to me) tea bag folding designs and liked the look of this star shape: 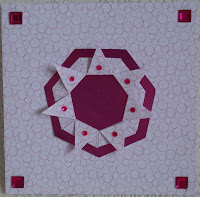 The backing paper is called grungy flower circles and reminds me of the bubbles in Aero chocolate! The pink hexagonal mat was cut from mirri card on my Ecraft machine. I've not had much time to get used to the machine but this was easy to cut using a design on the sd card that came with the machine. I'm not sure I like this card - I think there's 'something' missing ? The third card I made came about just because the papers were lying on top of each other on my desk and I liked the contrast between the black card and backing paper. This paper is called fairy stars and it's really pretty. 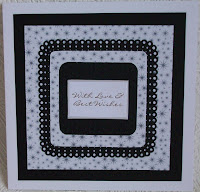 The card was really easy to make, just layers of black card and BP. One of the black mats was punched with a Martha Stewart punch around the page punch (I like the effect of these punches - can you tell?) and another was embossed with an embossing folder. I've enjoyed my first week as Guest Designer, although it was a bit of a rush to get the cards made. The challenge is sponsored this week so make sure you enter as you could win a crafting cd from Elegant Inspiration called Imagine.
Posted by Pamela at 09:49 2 comments: