Think I'm on a roll here folks - 2 cards in 2 days! But no housework done though LOL!!
As soon as I saw the theme for CD Sunday Challenge was Something Sweet I knew I had the CD to fit the bill.....it's called 'Something Sweet'! I bought it from ebay sometime ago and it's by The Creative Cottage. I decided to make an easel card as I like this style of card. 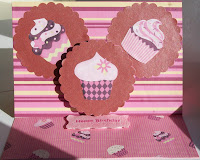 The stripey BP is as it was on the CD, the 3 individual cupcakes were taken into MCS and made smaller before cutting them out and layering onto the scalloped circles. The bit I'm most proud of is the BP on the base of the card. I took a BP from the CD into MCS - it was originally a pinl background with large yellow polka dots. I made it quite small and then turned it into a tile dragging it to cover an A4 sheet. Then I took the 4 cupcakes into MCS, made then quite small, copied and pasted them until there was 4 of each. I tilted them at different angles and spread them out over the BP. I'm really pleased with how the paper turned out, what do you think?
Must dash now to do some house things, like iron at least on outfit each for tomorrow.
Posted by Pamela at 17:10 7 comments:

At last a card!

Where does the time go? Is it really 4 months since I last posted? Eeek!!!
Every Sunday I decide I'm going to take part in the CD Sunday Challenge and before I know it It's Sunday again and a new theme's been posted. Well this week I've just about managed to get a card done and it's a biggie - an A4 landscape card. The theme this week was CD + stamping.

I've used a recent QVC TSV from Kanban. The chandelier is from a stamp with the backing paper from the Kanban 'Stamp Backgrounds' Cd. I took the BP into MCS and changed the colour as there wasn't a pink one on the CD. The main image of the rather elegant lady is recycled from an old notecard. Hubby decided the card needed a bit of bling (and who am I to disagree!)so I added lots of gems and some jewel brads.
Posted by Pamela at 19:24 3 comments:

Down in the dumps/a bit of fun!

I've been off work this week with flu and I've been quite ill with it - didn't know I had so many joints that could ache! I still wanted to take part in the CD Sunday Challenge but knew that I wouldn't be able to send the card to anyone because I didn't want to pass on the flu virus. So I decided to make a little 'scene' stepper card. The theme this week is Elegant Ladies and my 'laydees' are making their way up to the steps to the laydees boudoir! LOL. The rose swag is from MCS Walk in Wonderland. I copied it and flipped the image then laid them side by side so that when printed off there was no join down the middle. The ladies are from the Cocktail Hour cd by Hinny Bop Designs. They were taken into MCS and cropped/reduced until they were the right size. I then cut them out and stuck them to the 'stairs' on the stepper card. Not a card I can give to someone but it has cheered me up! 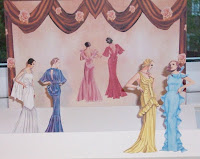 The theme for the CD Sunday Challenge Blog is Days Gone By. My image is from the Art Deco cd by Card Creations+. I've altered in MCS so that it fitted an A5 card and then copied and flipped the image. I've made a gatefold card and as it's my youngest sister's birthday at the end of the month I thought I'd give the card to her. Does she know how lucky she is! I've used 4 large brads and loads of gems. Of course she knows LOL! She's a card maker too (I introduced her and an older sister to cardmaking a few years ago).

I'm skidding in by the seat of my pants to enter this challenge! The theme was announced on Sunday 9th May and it closes on Saturday 15th May. I eagerly awaited the theme to be announced and managed to print of all the items last Sunday but it's taken me all week to get around to finish the card. So here's the result: 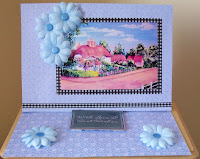 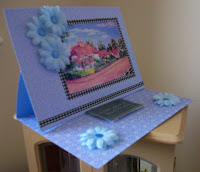 The image is from Pamela West Collection (Joanna Sheen). It had a frame around it to make it look like a painting but I chopped it off! It's mounted onto black gingham vellum. The two backing papers are from The Seasons Collection (Kanban) and Quintessentially Contrasts - Spring (Chris Warner) but I don't know which is from which cd, sorry! Hubby doesn't like the flowers, he thinks they're too pale and I should have used a more vibrant colour but I like them - what do you think? Off to tackle a mountain of ironing so that I'll have time to have a go at tomorrow's challenge.
Posted by Pamela at 15:15 7 comments:

Did I make you jump? I bet you never expected to see a blog posting from me again! Not only have I not had time to blog but I've also not been crafting - how sad is that? Since the beginning of the year I've only made 5 cards and I'm starting to think that I'll never remember how to make a card again. Luckily I've discovered a challenge blog that encourages using cds in cardmaking It's called The CD Sunday Challenge Blog (http://cdsundaychallenge.blogspot.com/). I've a huge collection of cardmaking cds and it's so much quicker to make a card using them. I've made the following card this afternoon:

I've used 2 cds. The background paper is from Sharon Duncan's Celebration Embossibilities and the central image is from Hallmark Card Studio Deluxe 2009. I've added some ribbon across the middle of the card and pearl brads in each corner.
I have to thank my crafting friend Carol for finding the challenge blog. She's been joining in since the blog started on 18 April 2010.
Here's hoping I'll be able to join in every week from now and (perhaps) blog a bit more frequently - don't hold your breath folks! LOL.
Posted by Pamela at 16:00 7 comments: