Let's Hear It For The Boys - CD Sunday

It's my turn to choose the theme for the next 2 weeks at CD Sunday. I know we all find male cards difficult to make but do we find it easier to make cards for little boys? So I chose 'Let's Hear It For The Boys' as my theme but your make doesn't have to be for a young child it could be for a teenager or a grown man.
I knew I had a project Cd that had several makes that would fit the theme - I just had to pick which one I wanted to do. 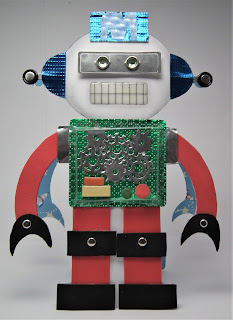 On the Cd he's called Robot Ralph which I didn't think was very roboty so as I've used craft metal to decorate him I changed his name to Metal Mickey. The Cd is from PolkaDoodles and is called Paper Boutique. It's from 2011 so quite old but the projects are still useable. The Cd gives you a template to print and cut out to make the card base plus another sheet with all the parts of the robot to cut out and stick to the template. From this printed sheet I only used the face, with the teeth included, as the other parts I used as template and cut them from funky foam and craft metal.
The blue craft metal has been embossed with a hessian embossing folder and the green with a dotted matrix folder. I didn't run the folders through a machine as I thought the pressure would make holes in the metal as it's quite thin. Instead I put the metal in the folder and then just rubbed over with an embossing tool which worked really well.
For the eye area I cut out the printed rectangle and layered a smaller craft metal layer on top. I then pushed 2 green jewel brads through the 2 layers for eyes. This was then put on foam tape to lift it up from the face. The teeth were already printed onto the face so I just used glossy accents on them.
Are the things sticking out of the side of his head aerials? I wanted them to look 3D so firstly I glued a black button on and then a small circle of silver card on the top..
I drew an 'M' onto a piece of holographic plastic and cut it out then glued it to the top of his head. Now everyone knows his name begins with the letter M LOL! 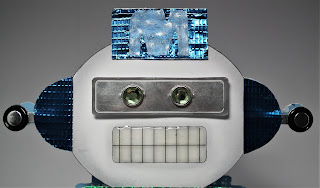 The arms and legs were cut from red funky foam with the hands, knees and feet cut from black funky foam with metal brads added just for effect. At this point he started to look like Father Christmas which is why I then did the rest of him in different coloured metals.
My favourite part is his belly! On the Cd he just has lights, buttons and Happy Birthday but I wanted to add cogs to make it look like the workings inside him. These were also cut from craft metal using a Sheena Douglass die set - Perfect Partners Time Traveller Geared Up. I then used the printed lights as a template to make the yellow and orange lights, layered them up and coated the top layer with glossy accents. I glued all this to the embossed green craft metal but it all looked too flat. So then I set about trying to find a square plastic 'bubble' to fit over it all. I like to recycle items - ask anyone who has received an ATC from me when the theme has been 'recycle' LOL! So I had lots of plastic bubbles cut from old packaging but none of them fitted or were too deep. So I decided to make my own. Using a piece of thick plastic packaging I scored around it and bent the edges to form the bubble - perfect fit! I had to use red liner tape to get it to stick to the craft metal as no other glue would hold it. To finish it I glued a green 'go' button and a larger red 'stop' one to the outside. 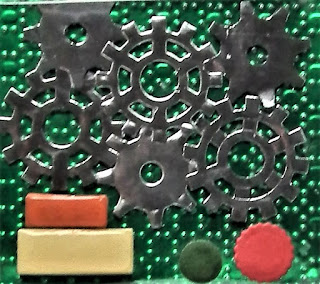 For the inside I printed off 2 sheets of backing paper from the Cd that has rockets, stars and planets on it. I also used the printed 'Happy Birthday' from the sheet that should have been on his belly but layered it up on the inside of the card. 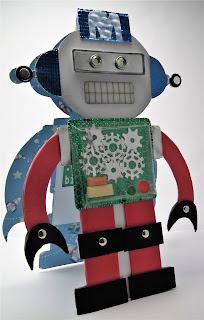 My theme runs until Saturday 9th September at 1 pm. To be considered for the prize I have you must use something from a craft Cd. It doesn't matter how small the element is, it could be a sentiment, a tag, a bow etc. but it must be from a Cd. You can use a download on your card as long as you also use something from a Cd. So you could use a downloaded image with a backing paper from a Cd for example. You must also state the name of the Cd in your blog post. The design team may visit your blog and leave comments but if you haven't followed these 2 rules then your entry won't be considered for the prize.
I hope the new school term (in England and Wales) doesn't stop you from crafting and entering my challenge - I look forward to seeing your entries.

The challenge at CD Sunday this time has been chosen by Jane and she has picked 'Past Times'. I knew I had a Cd that was perfect for this theme - I'd won it in a prize draw from a now defunct craft magazine. It's called 'Summer of 59' and is from Krafty Hands(who also appear to no longer exist!).
I wanted to use several of the images from the Cd and decided the best way to do that was to make an accordion card. I have a couple of Die'sire Create-A-Card Accordion dies that I bought from eBay fairly recently and chose the circle version of the accordion die for this card.

I copy and pasted the images into Word and resized them so they would fit the central circular section. I then cut 4 pages using the main die and decorated each of the pages using a Die'sire Create-A-Card Filigree Circle Overlay die cut out of Tonic Craft Perfect card in toning colours to match each of the Cd images. I made a small string of bunting using a Tonic Jubilant Jubilee Bunting die and used Promarkers to colour it to match the rest of the card. And basically that's all that I did - the accordion dies did most of the work I just had to assemble it!

This is the front of the card: 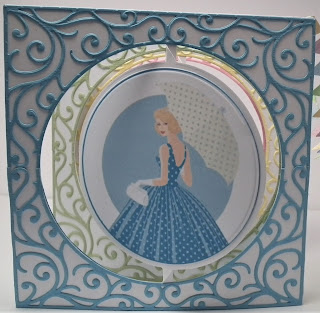 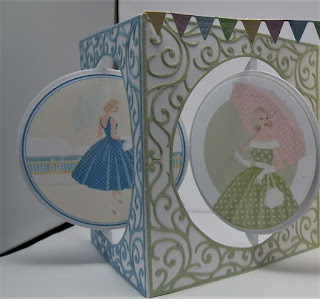 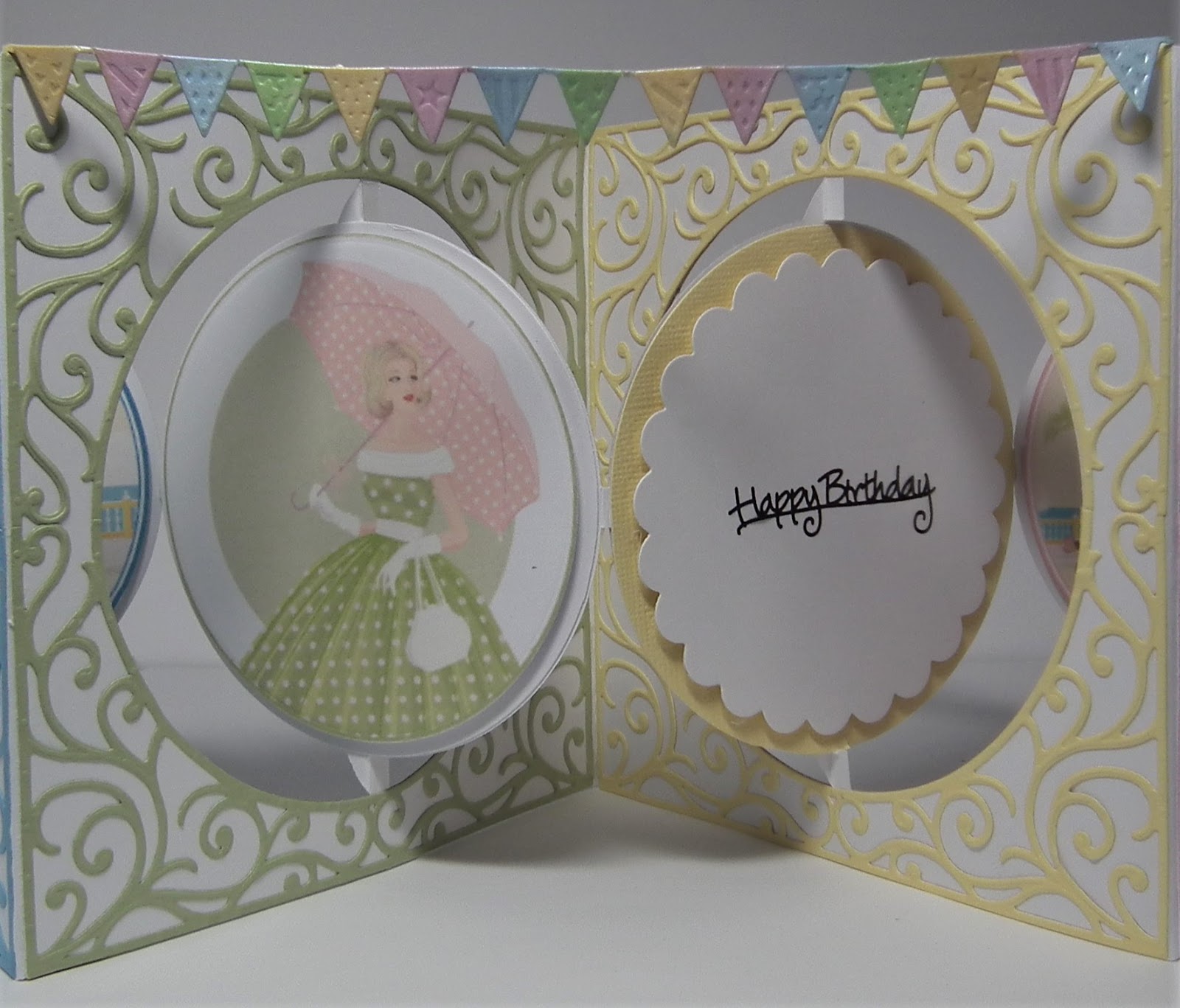 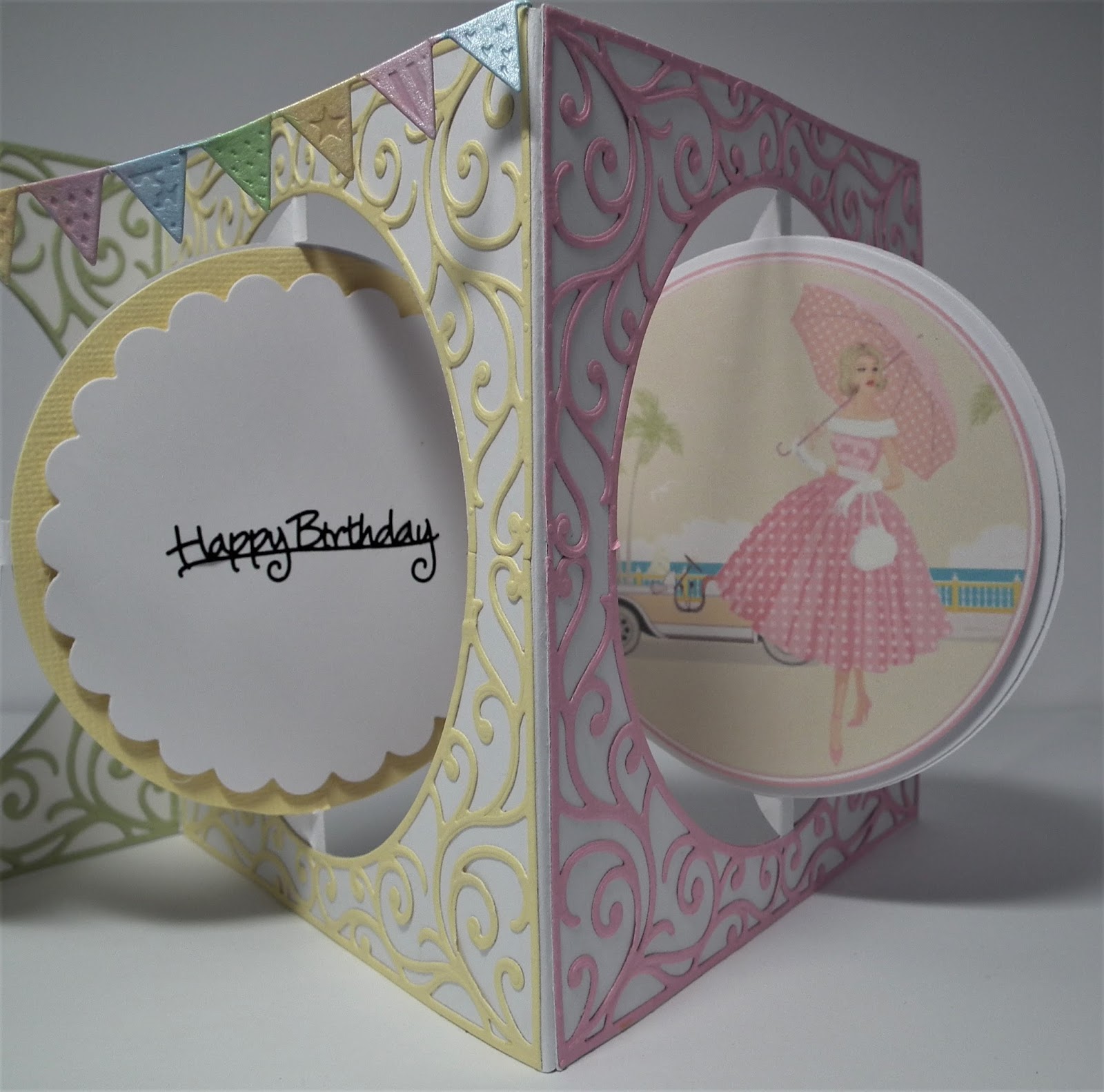 I also decorated the back of each section using the same colour as the front but different images of the women. 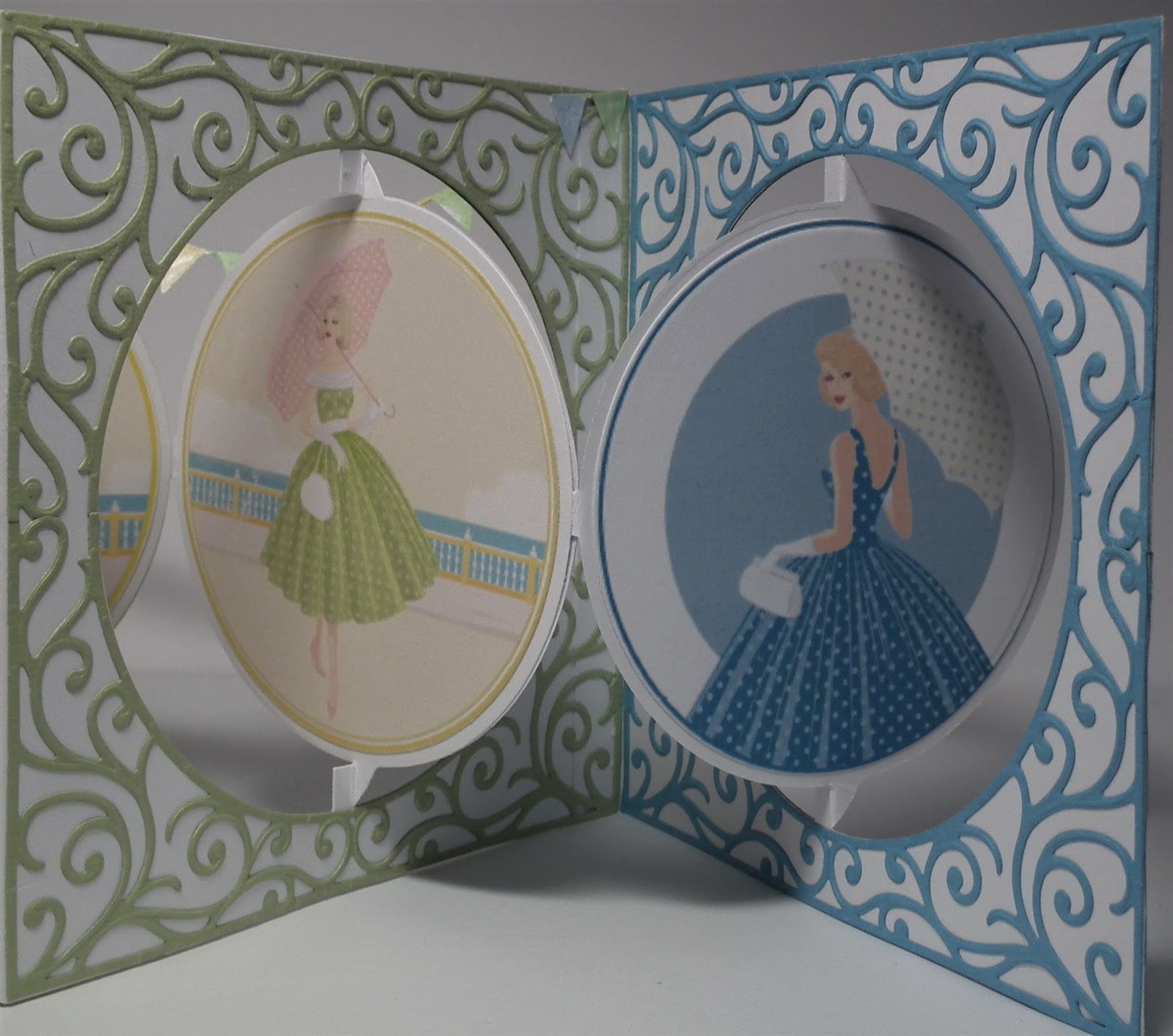 The back of the last 2 pages: 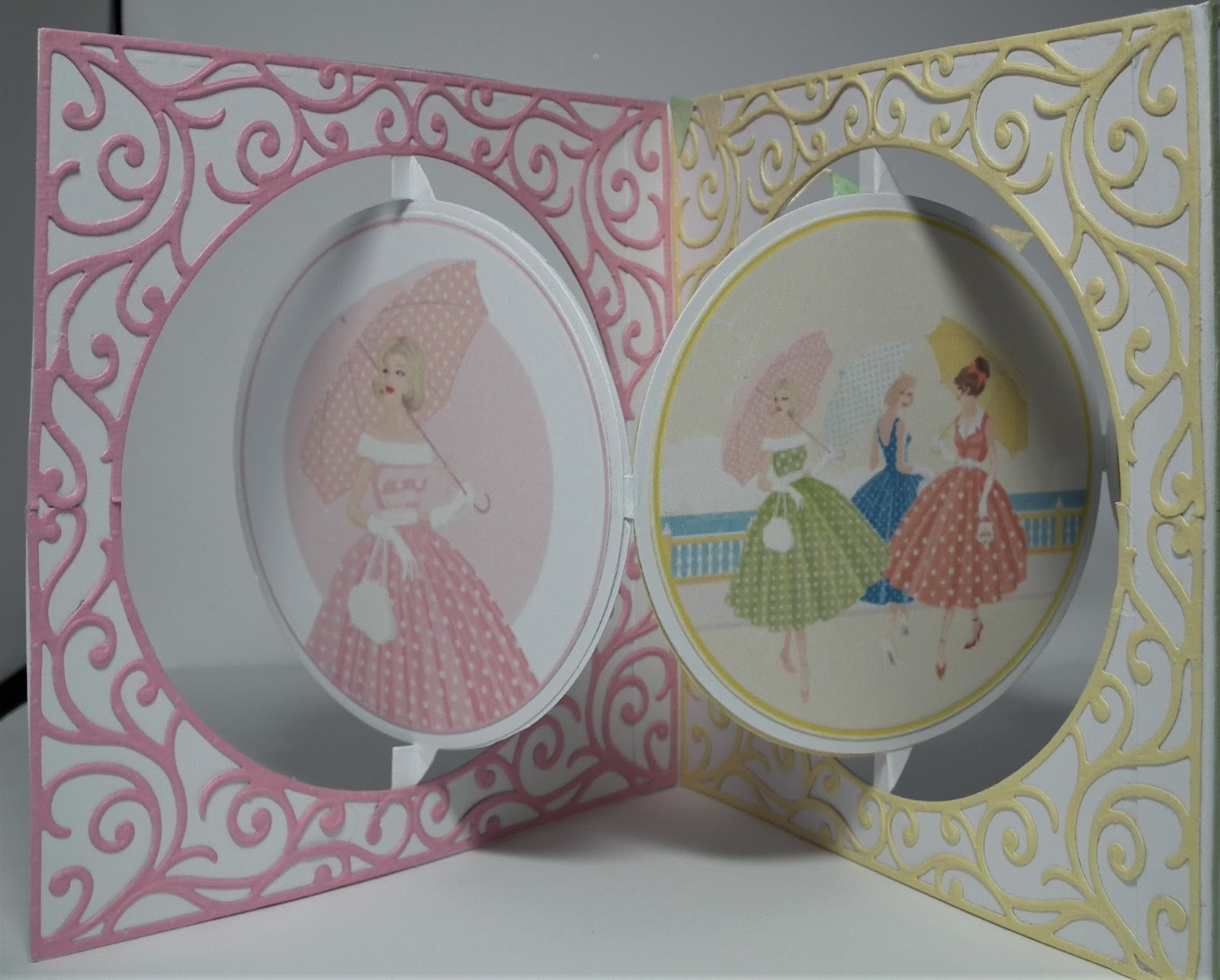 And finally the back of the card: 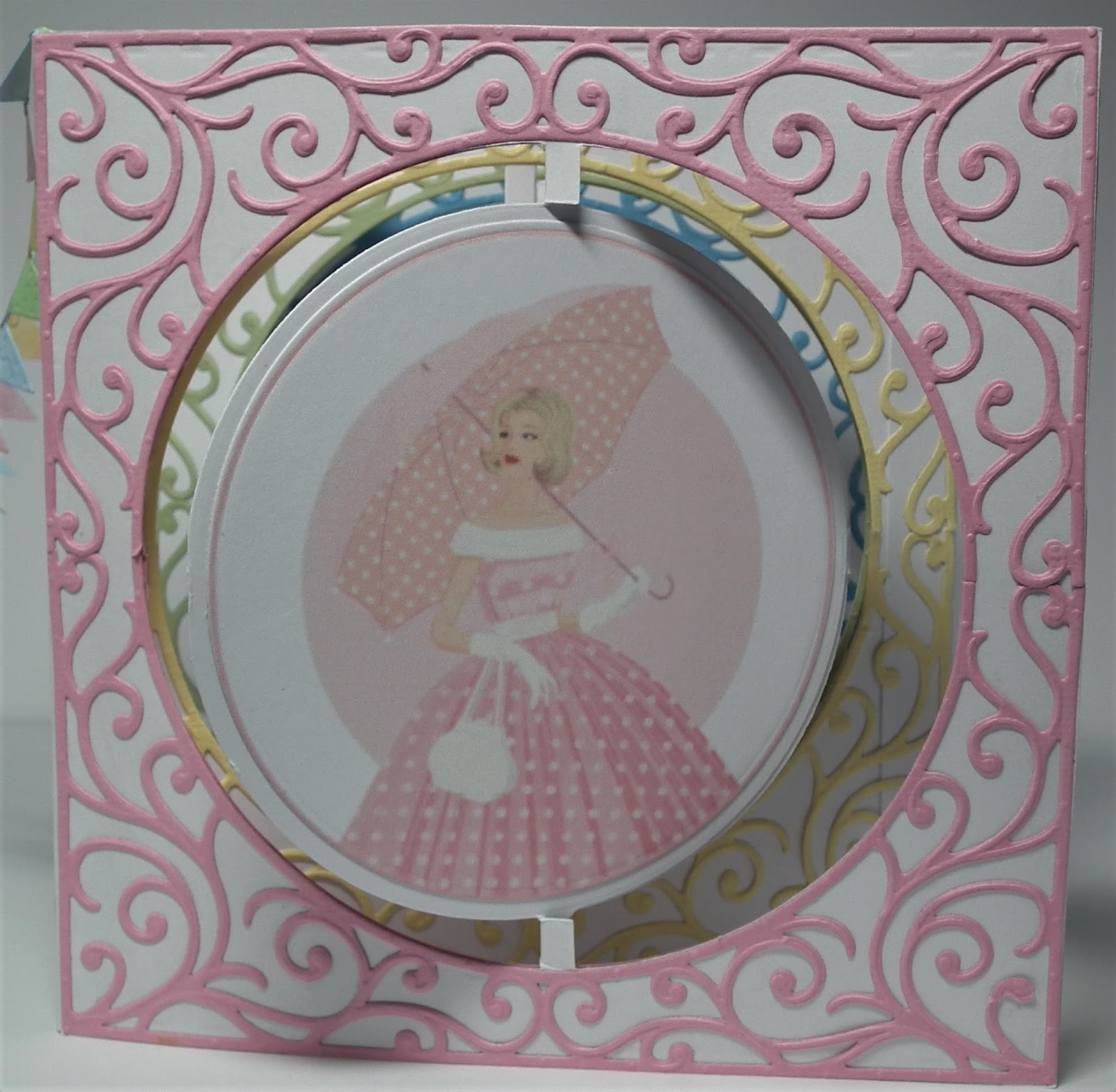 The challenge ends at 13:00 on Saturday 26th August. To qualify for the prize you must use something from a craft Cd (not a download) and you must name that CD in your post.
Posted by Pamela at 08:00 7 comments: