I've always watched the Olympics and even set an alarm to get up at 3am to watch Alan Wells win the Gold Medal in the men's 100 metres. When I heard that the Olympic flame would we coming through a town near me I wanted to see it. The weather was very hot and we walked to the location and then stood for over an hour to wait for the flame. I was very surprised at the number of people who turned up to support the runner. There was no advertising in the area and on the day none of the radio broadcasts mentioned that the flame was going through Pyle. The route was only 300 metres long with the flame being on the bus before and after the 300 metres but I thought it very remiss of them not mentioning it. Hubby and I both took cameras and as his was the better camera he took stills and I used the video feature on my little camera. I'd never taken a video with it before and the sun was so bright I couldn't see the image on the screen very well but we both managed to get very good pictures.
Here's some of the photos hubby took:


One of me when we first arrived, sitting down having a rest after our walk.
Note the handmade flags! 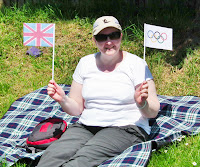 Some of the people waiting 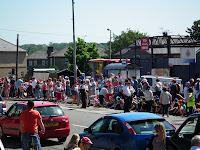 A group of scouts 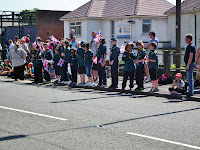 Two of the many police who were part of the entourage 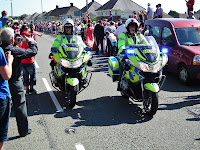 The Olympic mascot - anyone know what it's called (or even what it's meant to be!)? 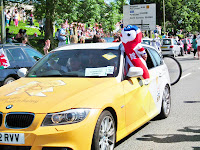 Another of the very many vehicles in the parade 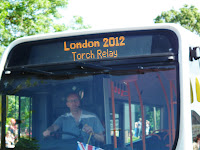 And finally the runner with the flame 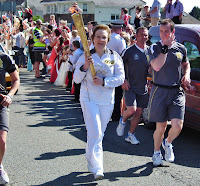 I've never added a video to my blog so fingers crossed this works! It's only a short video of the runner going past me. There was supposed to have been a 21 year old girl carrying the flame but this lady looks older than that so I don't know who she is.

If you turn the sound on you'll be able to here me shouting 'Go! Go! Go! LOL!
I hope you all enjoyed it as much I did and if you're not able to get to see the torch for real I hope the above has helped you to feel part of the occasion.
Finally - hello to the people who've become followers of my blog whilst I've not been posting, hopefully I'll be blogging more regularly now.