I decided to use the new theme at CD Sunday to make hubby's Christmas card. It's Jane's turn to pick the theme and she's chosen 'Christmas Things With Wings'. My first thoughts were angels/fairies but I was having a look through Craft Artist and came across a pre-made card design/layout with 2 owls. All the items on my card are from the digikit 'Cosy Up Christmas'. CD Sunday allow the use of Craft Artist in their challenges as it was originally available on CD.
I changed a few things in the pre-made design and came up with this: 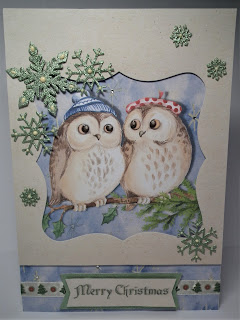 I opened 2 pages in Craft Artist so that I could print elements off to cut them out and 3D them instead of having a totally flat, printed card. The first page was the blue backing paper with the owls on the branch. I glued ribbon from my stash to the lower part and then stuck the page to the front of an A4 card. The second page was used to print off the paler backing paper and the Merry Christmas banner. I die cut an aperture using an outer edge die from Tonic's Jasmine Sunset Layering die set. This was then raised up on foam tape.

The Merry Christmas banner originally had a green layer around it but I wasn't happy with the shade of green so cut it off. I found some green glitter card in my stash and used it as a mat around the sentiment. This was also raised up from the ribbon.
I then needed to add something to the paler aperture layer as it looked very bare. I used Tonic's Falling Snowflakes Trio die set to cut snowflakes from plain white card. The small snowflakes are from another die that was free in a craft magazine. In order to make the snowflakes fit in I coloured the white card with Cosmic Shimmers Glitter Kiss in Sea Green Kiss. They turned out almost identically in colour to the green glitter mat around the sentiment! I finished off by adding Tonic's Nuvo Drops in Buttermilk to the snowflakes 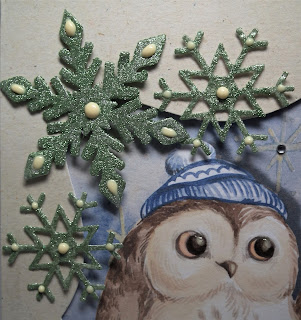 I then used glaze on the eyes and the stars on the blue backing paper were highlighted with a Spectrum Noir Sparkle pen in clear and then a clear gem put in the centres. 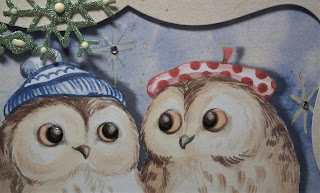 Don't forget that the CD Sunday challenge is all about making items using craft CD Roms. You can use other craft items on your card/project, such as a stamp or digi image, but you must also include something from a CD. So if you like colouring stamped images or digis you can still enter the challenge but you must include something from a CD such as a backing paper, a sentiment or a butterfly for example. In your blog post you must give the name of the CD you've used. This is especially important if the items you've used can be bought as a download as well as a CD as the Design Team can't tell which has been used unless you tell us. Your card can't be considered for a prize if you haven't used a CD or if you haven't told us the name of the CD in your post. The Design Team still leave comments on the blogs but there's no chance of winning if the above hasn't been followed.

And we now have three ways of entering the challenges - the blog, by email and now a new Facebook page!
This theme, 'Christmas Things With Wings', will run until Saturday 2nd December. I'm sure everyone has their Christmas stash out frantically making their own Christmas cards so hopefully you'll make one that fits in with this theme and can join in - good luck!

Two posts in a row that have nothing to do with the CD Sunday Blog Challenge LOL!
Recently it was my brother and his wife's first wedding anniversary. I'd made table decorations and place names for the reception last year and still had some of the purple card left so used it on this card. 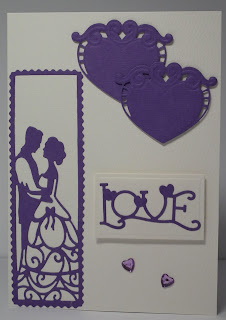 The figures were cut using Tonic Silhouette Scenes First Dance die set. The word 'Love' was also cut using a die from Tonic - the Someone Special die set. For the two hearts I used Marianne Design Creatables - Petra's Heart die set. A simple layout with some parts raised on foam tape which I think worked well and they loved it!

At the other end of the scale it was mine and hubby's 39th wedding anniversary the week after and this was my card to him. 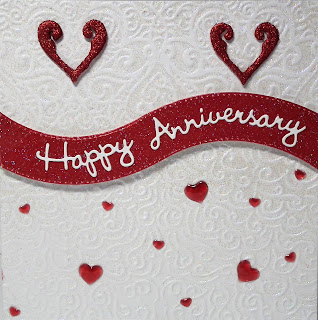 It looks as if I used white glitter card but I didn't. It's a piece of plain white card that's been embossed using the Filigree Affections Idyllics embossing folder. I then rubbed Frosty Sparkle Glitter Kiss from Cosmic Shimmer all over the card to pick up the embossing.
I then cut a banner from red sparkly card using a die from Apple Blossom's Wintry Additions - All Occasions Collection. The Happy Anniversary is a die from Creative Dies.
I finished the card off by adding some heart die cuts that I'd covered in Fire Red Glitter Kiss and some red heart dew drops that I've had a very long time!
Posted by Pamela at 09:00 4 comments:

I thought it was time to make serious headway with my Christmas cards and had a rummage through my Christmas stash. I love Christmas so my Christmas card-making stash is huge - it fills a small wardrobe and that's not including all my CD roms, dies and stamps Eeek!!!
So I sat down with a Hunkydory kit that was free with Card-making and Paper-crafting magazine a few months ago. The colours are mainly pastel shades and I don't normally make this style of Christmas card but the toppers were so pretty I wanted to use them. I made several cards and this is just one of them: A blog I follow posted about the Crafting With Dragonflies challenge whose theme is 'Use Your Stash Plus Bling #93' so I thought this card was suitable.

The bling that I've added are some pale pink pearls which are the same shade as a pink in the topper. All I've used is one large topper and a sentiment banner so there's still loads left in the kit.

At CD Sunday this time it's Carol's turn to pick a theme and she's chosen 'Take a Stamp'.
The design team decide on themes well ahead of the date that they're published on the challenge blog. When I was thinking of making my card for this theme, back in June, my husband asked me to make some cards for the staff at the local cancer centre. He was due to have his final chemotherapy session and wanted to thank the staff for making the time he spent there as pleasant and stress free as possible.
I'd seen a design in Papercraft Essentials magazine (issue 147) that I'd wanted to try so made these cards for the staff on the two wards that had treated him. 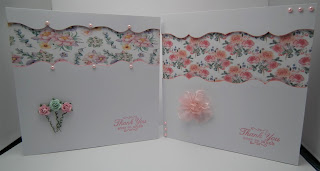 I printed the backing paper from a My Craft Studio Cd called 'Field of Flowers' which was then glued to the front of an 8 by 8 card. I then took another piece of white card and removed a section using a die. I used the outer edge die from Clematis Climber Strip Die Set by Tonic. I then inked the edges of the white card with a toning colour. The sentiment was then stamped in the same colour ink in the bottom right hand corner. The stamp was from a set of sentiment stamps free with Cardmaking and Papercraft magazine.

I embellished the cards slightly differently. The first one had pearls along the cut and inked edge and three flowers grouped together. 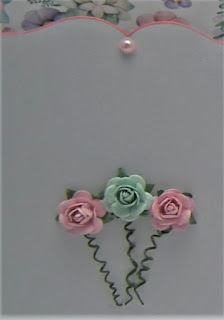 The second card I grouped the pearls at the edges of the card and glued a ribbon rosette to the front. 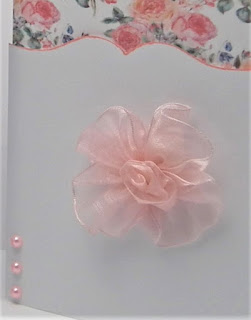 Hubby bought boxes of biscuits for both the wards and the staff thanked us both and quizzed me about how I'd made the cards.
The CD Sunday challenge is all about making items using craft CD Roms. You can use other craft items on your card/project, such as a stamp as in this theme, but you must include something from a CD. So if you like colouring stamped images or digis you can still enter the challenge but you must include something from a CD such as a backing paper, a sentiment or a butterfly for example. In your blog post you must give the name of the CD you've used. This is especially important if the items you've used can be bought as a download as well as a CD as the Design Team can't tell which has been used unless you tell us. Your card can't be considered for a prize if you haven't used a CD or if you haven't told us the name of the CD in your post. The Design Team still leave comments on the blogs but there's no chance of winning if the above hasn't been followed.
The challenge runs until Saturday 18th November at 13:00.