.......I've finished my card for the CD Sunday blog - 4 days early! I've needed to destress so have immersed myself in crafting. The way things are going there'll be a few more cards before the week is out. The theme this week is Black and Blue and as I had a birthday card to make for a female relative I knew what topper I was going to use. I bought a sheet of Kanban toppers at a craft show in Cardiff and as there wasn't a show last year I must have had it since October 2009!

The backing paper is from Funky Hand's cd Funky Seasons. It's designed as a sheet of small squares but when I held the topper over it I preferred the squares to be diamonds - so turned the paper around. I then found some square gems that I also turned on the side to repeat the pattern of the paper. I don't know if other cd crafters do the same as me but when I'm looking for a suitable BP I end up printing loads of sheets as the colours always look different on screen. So I used one of the 'extra' sheets as an insert and blinged it up with some peel offs. 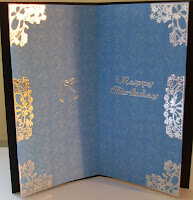 I've got the idea for 2 more cards in my head so while I'm at the computer I'll be printing off a few more things from cds.
Posted by Pamela at 14:03 9 comments:

......moving! My godson and his parents have just moved house so when I saw the theme on CD Sunday was 'M' is for I knew just what card to make. I think they're new home is a little bigger than the house on my card as they've moved into a barn conversion!

I've recently got into Nikki Hall's Polka Doodles cds and have 5 now. The house image is from Paper Boutique Vol 3. It's meant to be a house shaped card with an image on the back and front. I've used the 2 images side by side to look like one large house and made an A4 card. The window boxes, roof gables and some of the flowers are decoupaged. The cloudy sky and grass background are a clip art image from the internet (hiding behind the house is a fairy castle LOL! For a change my card was ready by 3pm today but I was unable to blog it as we had a phone call from the police. FIL had been wandering and a very kind stranger realised he shouldn't have been out on his own (no coat on in heavy rain). Luckily FIL had taken the carers folder with him and his address was in it so they drove him home. They then phoned the police who arrived and started ringing the numbers next to the phone. Our number is first on the list thankfully and the police officer stayed with him until we got there. We had to bath FIL and put warm clothes on him and stay until he'd eaten a warm meal and his meds had started to take effect (they make him sleepy). Off now to try and relax and enjoy what's left of the evening.
Posted by Pamela at 20:23 3 comments:

The theme for CD Sunday Blog Challenge this week is 'Inspired by Peacocks'. And as it's the first Sunday in a month the challenge is being sponsored by none other than.....Glenda Waterworth from Chocolate Baroque. As I already have some of Glenda's cds I thought it would be rude not to use one! I decided to stick with the peacock theme and used the Peacock Summer Party cd. There are some many lovely images and papers on these cds and I couldn't chose which to use so decided to make a triple easel card so that I'd have lots of surfaces to cover!

The base card is a beautiful blue colour which fitted in well with the blue of the papers and peacocks. The deep blue bp on the base is printed on photo paper. The peacocks and fans are printed on Ultimate Graphic paper. It's classed as paper but it's a light weight card and ideal for toppers. The surface is really smooth and printer colours come out really rich. I'm using the new Blogger interface for the first time so hope this post comes out ok!
Posted by Pamela at 18:13 4 comments:

My mate Debs of Debbees cds has been guest designer at CD Sunday for the month of August. So as a farewell pressie I decided to use a CD from her web site for my card this week. The theme is Just Because... and I decided it was Just Because she's my mate and I try to promote her web site as much as possible! Could that be the longest title for a card? LOL! One of Deb's cds is by Pamela West called Dayze of Innocence. There's some lovely artwork on this cd. I chose the acetate decoupage for my card and there's 7 layers all together! It was impossible to get a proper picture of the finished card. Unless you're exactly square on the the image it looks at of line so apologises for the awful pictures. The first one was taken with a camera but looks fuzzy and as if the decoupage isn't lined up properly:

So I then scanned it but because the card is so thick the scanner let in a lot of light - on the right hand side of the card:

So sorry Debs but I haven't done these fantastic images any justice! LOL! I know you'll forgive me though.
Posted by Pamela at 21:27 3 comments: