CD Sunday are celebrating their 6th birthday and instead of choosing a theme they want us to backlink to a card that we've previously entered into one of their challenges.
I've entered over 40 of their challenges over the six years so knew this wasn't going to be an easy decision.
In the early days the challenge was weekly and I found out about it in time to enter the 3rd challenge so at first I thought I would backlink to that card. Then I remembered a Christmas card I entered into a challenge in November of last year which I really liked and thought I'd backlink to that card. Or should it be one of the items I made when I was a guest designer in October 2011 and March 2012? Decisions, decisions! Eventually I chose a card that proved to be a winner in more ways than one! 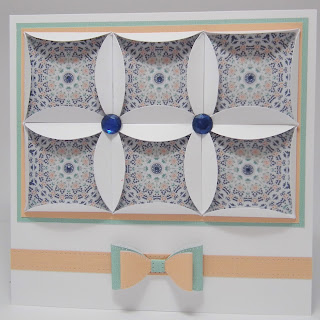 The theme was chosen by Jocelyn using a photo she'd picked as inspiration. She chose this card as number 1 in the top three entries for that week - 22 August 2015. The design is called cathedral Window and I followed the instructions from Quick Cards Made Easy craft magazine I sent them a photo and told them it had won me a prize in a blog challenge. They printed it on their letters page and I received a prize from them too LOL! Thanks for the inspiration Jocelyn!
My original blog entry is here.
There are some fabulous prizes up for grabs so make sure you get your entries in. You can also enter even if this is your first time. Just backlink to one of your own creations where you've used something from a craft CD.

Good Luck everyone!
Posted by Pamela at 13:40 7 comments: