My dear hubby was 50 yesterday bless him! I made him a word book - I'm afraid there's six photos all together!

The photos are from the day he spent at the rugby in March. He and his lifelong friend had a hospitiality package to see the Wales/Ireland match. The were chaeuffeur driven to Cardiff Castle where they were greeted by a Welsh Male Voice choir. Then into the castle for a 4 course meal and free drinks, off to the match and back to the castle for more food, drinks and after dinner speeches. They had a great time and were given special treatment as they thought there birthdays were that day! They even had a cake with candles for them both.
I've been blog hopping today and there's some great candy on offer over at http://katharina1704.blogspot.com/2009/04/woj-elisabeth-bell-summer-stamp-kit.html
It closes tomorrow so get ver there now to be in with a chance of winning.
Posted by Pamela at 18:06 7 comments:

Nothing for ages and then 2 posts in one day! LOL.

Just been blog hopping and I've been given a blog award by my mate Hazel (http://didosdesigns.blogspot.com/) 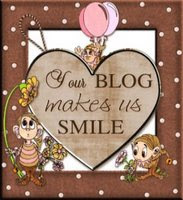 I now have to pass it on to 5 others. I've chosen these blogs because I just love their cards:

I've been missing from blog land for sometime - my poor blog! But thanks for sticking with me and continuing to add comments. It's greatly appreciated.
I'm having a break from Craft Forums at the mo as something on one has upset me big time! So my blog is now getting some much needed attention.
Anyway thought I'd do a catch up on a couple of cards I've made recently.

I made this for my godson's 12th birthday. His parents were buying him a guitar so I thought I'd use a guitar image as my theme. You can't tell from the pic but there are 3 frames surrounding the guitar,a yellow, black and black/yellow one. These are raised onto 3d foam. The top frame then has music note peeloffs added to it. The card was created using Card Creations+ Toolbox CD.

This card was for a friend's birthday and again I used a card making CD. This time it was My Craft Studio The Finishing Touch. I changed the colours and printed it onto card. I also went over some of the flower petals with a sakura clear glaze pen.

I always thought Match-it peeloffs were a bit pointless - until I
used them! This card was made using the oriental matchits and is
an A6. The vase has been curved slightly so the flowers would fit behind. Some of the flowers are also lifted up with silicone glue to make them look more like a vase of flowers would in real life.
I'm now going to try and make a card for hubbies 50th birthday as it's......tomorrow! See Ya!
Posted by Pamela at 14:20 3 comments:

Some cards - at last!

This card was for a RAK group I belong to. The image is from a Fee J CD. I created the background using Card Creations + Toolbox CD. The swirly pattern under the image was stamped straight on the card but it didn't stamp clearly. So I restamped it onto a piece of card and placed over the original messy bit!

I liked the previous card so much I made a second version. Again the image is from a FeeJ CD and I created the paper using the Toolbox CD. This card was for Hazel ( http://didosdesigns.blogspot.com/) and I also made 2 ATCs to go with the card.

For the first ATC I used a paper I found on a teabag folding site. The ribbon slides were freebies from a magazine - I think!
The second ATC I used up the remaining BP from the card. The flowers were a freebie from a magazine and the button I found in my late MILs button box (it was way too pretty to throw away).
I always say that I hate making ATCs but I did enjoy making these. I even like the second one and had to force myself to put it in the envelope to Hazel!
The weather is beautiful here today, hope you're having the same. Enjoy the rest of your day everyone.
Posted by Pamela at 15:30 6 comments:

Just been blog hopping and wanted to share a couple of great blog candies with you.
Pop over and check out :

Camilla is Dutch but her blog can be translated into English. (Apologies Camilla is Norwegian)

Jules has some really cute stamps in her blog - a deer and an owl to name just 2.

Tomorrow I'm hoping I'll have time to post piccies of cards I've made recently, but I'm not holding my breath!
Hugs to all.
Posted by Pamela at 21:58 1 comment:

Been ssooo busy lately - no time to blog and very little time to craft. I have a new toy and have been kept busy using it.
Unfortunately not a crafting toy but .......................................... a Bissell carpet cleaner! LOL! Hubby's wanted one for sometime so when we saw it on offer we bought it. Some how though hubby isn't the one who uses it. My right arm/shoulder/hip now ache for Wales.
FIL has also kept me quite busy not just with washing/ironing/cleaning but with trying to keep him calm and not worry over every little thing. Had him on the phone yesterday in tears as he'd had a letter he couldn't deal with. Hey Ho I'm sure things will improve soon.
Hope to get back to crafting and posting soon. Take care all - see ya!
Posted by Pamela at 14:23 No comments: